July 25, 2017
I have just finished repairing this Seeburg SHP3 for a friend. My friend collects and refurbished jukeboxes and he occasionally brings me the amplifiers. 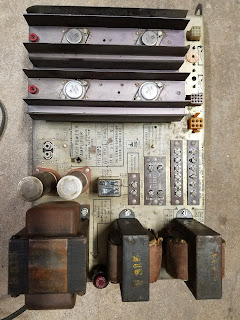 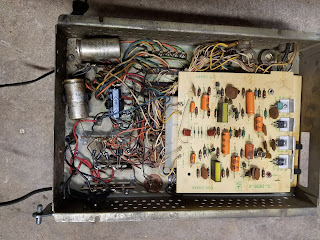 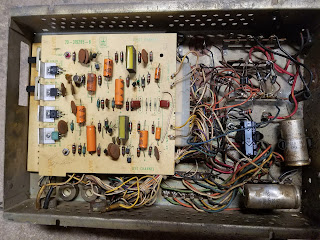 The above photos show the amplifier as I received it. It was obvious someone had done some work before. The driver transistors as well as the output transistors were not originals. Also, Q5114 had been changed. It is the big silver transistor you see on the driver board.

The initial power up  using a dim bulb tester showed that the right channel was not working and too much current was being drawn.


Why I use a dim bulb Tester: 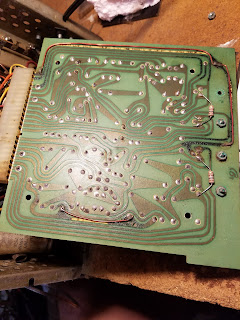 Notice the red enamel wire running along the top edge of the driver board. A trace should be there, but someone ran the amplifier with shorted transistors and burnt the 32+ volt trace off the board.

After those repairs the right channel was back to working and the current level was normal. I did substitute Seeburg Parts with modern parts. The substitutions are listed below. 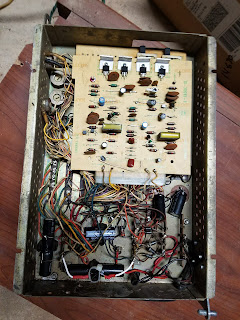 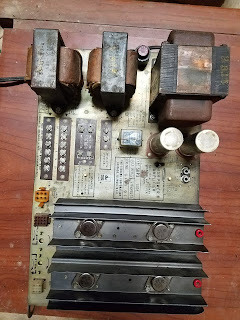 The final thing was to replace all electrolytic capacitors and change out the left channel driver transistor and output transistors so they matched the right channel. I did check the biasing and it appeared normal.

This amplifier is now back singing and ready for a jukebox.